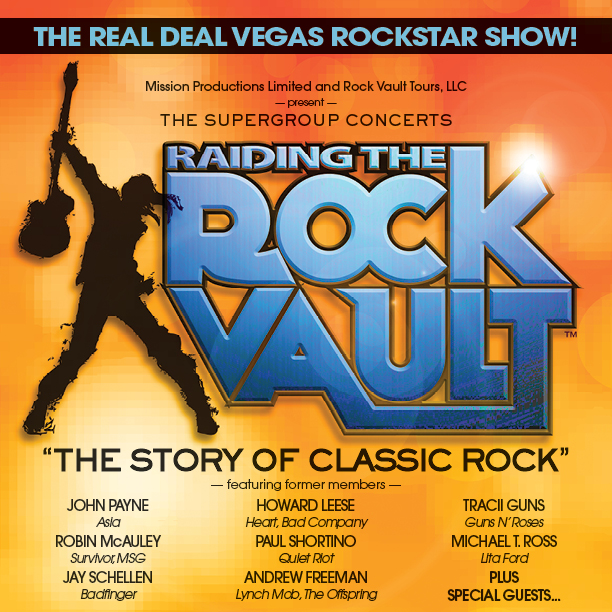 “…we can honestly tell you that we hadn’t had fun like that…before.”

The history of rock ‘n’ roll will come to life like never before when “RAIDING THE ROCK VAULT,” a one-of-a-kindrock concert experience boasting the ultimate set list, kicks off a year-long runSaturday, March 9th at the LVH – Las Vegas Hotel & Casino. Tickets for “RAIDING THE ROCK VAULT” go on sale Saturday, February 9th at 10am.

Narrated, sung and acted along with compelling imagery including historical footage, the show transports the audience back to a magical musical journey from 1948 to 1989, traversing the genre’s history chronologically through the ‘40s, ‘50s, ’60s, ’70s and ’80s. “RAIDING THE ROCK VAULT” features classic anthems from The Rolling Stones, The Who, The Doors, Led Zeppelin, Jimi Hendrix, The Eagles, Queen,Van Halen,AC/DC,Journey, Free, Bryan Adams, Supertramp, Toto, Deep Purple, and more, truly boasting “The Greatest Set List Ever.“

“RAIDING THE ROCK VAULT” follows a compelling theatrical narrative told via narration by acclaimed actor Richard Malmos in front of the giant ROCK VAULT onstage. The music, performance, and visuals come together to tell this unforgettable tale.

Written by esteemed Grammy Award-winning record producerDavid Kershenbaum (Joe Jackson, Tracy Chapman, Supertramp)and musician, producer and vocalist John Payne (Asia), “RAIDING THE ROCK VAULT”was born to give audiences an illuminating look at the history of rock and for those who lived it, an exciting trip down memory lane. It’s a rock-u-mentary you do not want to miss.

“The LVH is thrilled to host what promises to become a must-see show for Las Vegas visitors and locals alike,” said LVH Vice President of Entertainment, Rick White. “Classic rock music…real rock stars…the legendary LVH Theater…the story of the greatest musical genre of all time…it doesn’t get any better than that,” added White.

The VAULTwill open and you may never view rock ‘n’ roll the same way.

Ticket prices for “RAIDING THE ROCK VAULT” range from $49 to a special Rock Star Package for $100 (which includes tickets in first five rows, t-shirt, signed concert program, signed album, meet and greet and VIP pass) plus fees. Tickets can be purchased by visiting the LVH box office or by logging onto thelvh.com, vegas.com, or ticketmaster.com. Tickets can also be purchased by calling 702-732-5755 or 1-800-222-5361.

About LVH – Las Vegas Hotel & Casino: LVH – Las Vegas Hotel & Casino, a world-class destination, offers a unique blend of amenities and excitement with all your favorite table games, hottest slots on the market, incredible restaurants, endless entertainment, more than 200,000 square feet of meeting space and the world’s largest race and sports SuperBook®.  LVH – Las Vegas Hotel & Casino provides a range of culinary adventures including exhibition-style Japanese cuisine at the world-famous Benihana, fine steaks at TJ’s Steakhouse, Pan-Asian dining at 888 Noodle Bar, authentic Japanese sushi at Teru Sushi, a traditional buffet that features tastes from around the world, and more. LVH boasts a strong entertainment schedule led by world-class headliners in the LVH Theater, as well as a variety of on-going production shows in the Shimmer Cabaret. Its proximity to the Las Vegas Convention Center and its designation as a Monorail station (connecting it to the Las Vegas Strip) makes it the ideal hotel for conventions and visitors alike.  For more information or to book accommodations, call toll free at (800) 732-7117 or log on to www.thelvh.com or connect with us on our social pages www.thelvh.com/Hotel/stayconnected.