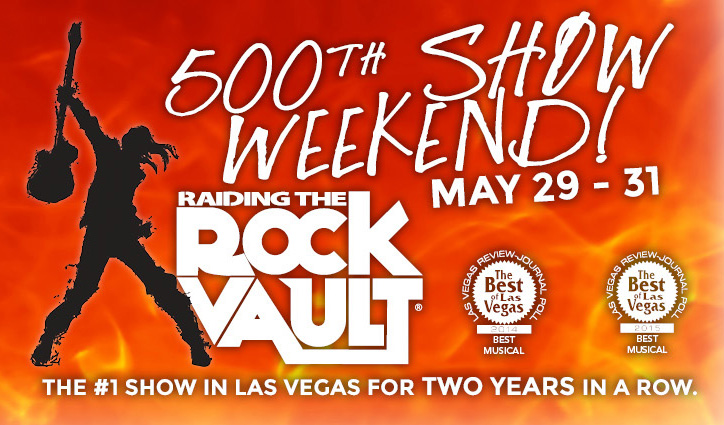 In honor of 500 performances, the first 500 tickets for the weekend’s shows will be offered at $10, and a special live outdoor event will take place 5/30! Full details and ticket info at TropLV.com/RockVault500

LAS VEGAS (May 19, 2015) – “Raiding the Rock Vault,” which was recently awarded the coveted “Best of Las Vegas” title by Las Vegas Review-Journal readers for the second year in a row, will celebrate its 500th performance on Saturday, May 30, and move into a new 8 p.m. time slot. In honor of this milestone, the show and all its stars are ready to rock the Strip with a special live street performance at 5 p.m. that day outside The New Tropicana Las Vegas, as well as other festivities during Rock Vault 500 Weekend. In addition, the first 500 tickets sold for shows May 29-31 can be purchased at $10 and include one free well drink.

“The people have spoken and named us ‘Best of Las Vegas’ for the second year in a row,” said producer Sir Harry Cowell. “We’re coming up on our 500th show and we couldn’t have done so without our fans. Rock Vault 500 Weekend is a blowout party to celebrate them.”

Fans are invited to a full day of festivities beginning at 1 p.m. on Saturday, May 30, outside The New Tropicana Las Vegas, where a special menu and cold beverages will be served. Live entertainment will begin at 3 p.m., culminating in a special set by the acclaimed show on the Las Vegas Strip at 5 p.m. Admission is free and open to the public. For $200, guests can purchase a VIP Wristband and enjoy unlimited food and drinks, as well as VIP Rock Star Package tickets to that evening’s 8 p.m. show. For $100, guests can purchase a Preferred Wristband and receive unlimited food and drinks and a General Admission ticket to the show.

Beginning Saturday, May 30, “Raiding the Rock Vault” will perform Wednesday-Monday at 8 p.m.; the show will be dark Tuesdays. The show will continue to perform Friday-Wednesday at 9 p.m. through Friday, May 29. To purchase tickets, please call (702) 739-2411 or (800) 829-9034, or visit the Tropicana Las Vegas Show Tickets desk or TropLV.com. Tickets are subject to availability on a first-come, first-served basis. Four-ticket limit per person for the $10 General Admission ticket.