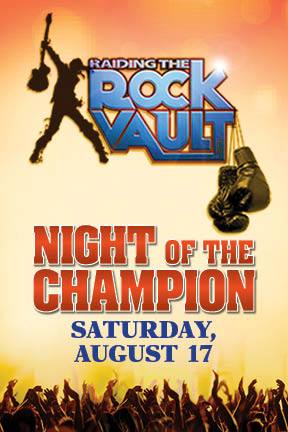 RAIDING THE ROCK VAULT salutes Olympic Gold Medalist and World Champion Leon Spinks with a very special performance. In honor of Spinks’ 60th birthday, Thursday, July 11, 2013, RAIDING THE ROCK VAULT has announced that it will host a “Night of the Champion” show at LVH – Las Vegas Hotel & Casino, formerly Las Vegas Hilton, the historic location where he defeated Muhammad Ali in 1978. Proceeds from the night will go to The Richard Steele Foundation & Boxing Club and New Vista.

“Leon Spinks is a living legend,” said John Payne, creator, director and producer of RAIDING THE ROCK VAULT. “LVH is one of the locations where he made history and we’re honored to celebrate him and support two local nonprofits that are dedicated to wonderful causes.”

Spinks brought home the gold medal at the 1976 Olympic Games in Montreal as a champion in the light heavyweight division. The next year, he made his professional boxing debut and worked his way up the ranks, becoming one of the leading heavyweight challengers. In 1978, he defeated Muhammad Ali for the undisputed heavyweight championship at LVH in what was considered one of the biggest upsets in boxing history. RAIDING THE ROCK VAULT and LVH proudly welcome Spinks for a night of rock ‘n’ roll mayhem at the very location of his historic fight against Ali.

The story of classic rock comes to life with RAIDING THE ROCK VAULT. Boasting the ultimate set list, the show takes audiences on a magical musical journey, traversing the genre’s history from the ‘60s through the ‘80s.

Ticket prices for RAIDING THE ROCK VAULT’s “Night of the Champion” with Leon Spinks range from $59 to $150 (plus tax & fees) for a special Rock Star Package (which includes tickets in first five rows, t-shirt, concert program, album, meet and greet and VIP pass). Proceeds from tickets will go to The Richard Steele Foundation & Boxing Club, which helps youth and families thrive through education, intervention, leadership initiatives and community outreach, as well as New Vista, an organization dedicated to developing programs to meet the needs of intellectually challenged individuals. For an up-to-date schedule or to purchase tickets, visit the LVH box office or log onto thelvh.com, vegas.com, or ticketmaster.com. Tickets can also be purchased by calling 702-732-5755 or 1-800-222-5361.

About LVH – Las Vegas Hotel & Casino: LVH – Las Vegas Hotel & Casino, a world-class destination, offers a unique blend of amenities and excitement with all your favorite table games, hottest slots on the market, incredible restaurants, endless entertainment, more than 200,000 square feet of meeting space and the world’s largest race and sports SuperBook®.  LVH – Las Vegas Hotel & Casino provides a range of culinary adventures including exhibition-style Japanese cuisine at the world-famous Benihana, fine steaks at TJ’s Steakhouse, Pan-Asian dining at 888 Noodle Bar, authentic Japanese sushi at Teru Sushi, a traditional buffet that features tastes from around the world, and more. LVH boasts a strong entertainment schedule led by world-class headliners in the LVH Theater, as well as a variety of on-going production shows in the Shimmer Cabaret. Its proximity to the Las Vegas Convention Center and its designation as a Monorail station (connecting it to the Las Vegas Strip) makes it the ideal hotel for conventions and visitors alike.  For more information or to book accommodations, call toll free at (800) 732-7117 or log on to www.thelvh.com or connect with us on our social pages www.thelvh.com/Hotel/stayconnected.